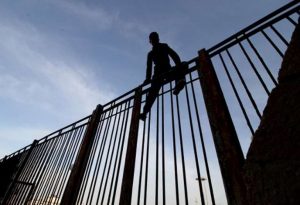 A Moroccan young boy climbs a fence in the port of the Spanish enclave of Melilla bordering Morocco on May 16, 2017.
Midnight in Melilla and hidden near the harbor, nine-year-old Wahib is one of many children willing to do the “riski”: take all the risks necessary to embark clandestinely on transport to Europe. Wahib is one of 50 to 100 foreign minors, mainly from Morocco, who sleep on the streets of Melilla after sneaking into the Spanish city with hopes of getting onto a boat, according to a recent report by Madrid’s Comillas Pontifical University.